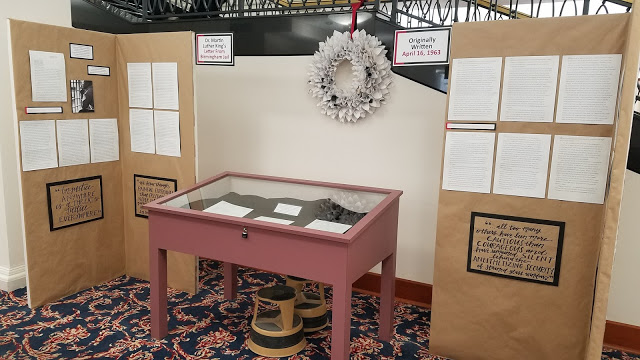 Dr. Martin Luther King Jr.'s "Letter from Birmingham Jail" is considered to be one of the most important texts of the Civil Rights Movement. In observance of Black History Month, and in celebration of Samford University's 50th anniversary of integration, the library is proud to display this letter in its entirety on the 1st floor of the library near the Circulation Desk now through February 26th.

This display incorporates enlarged reproductions of an original copy of the letter which is housed in the library's Special Collection. This copy was given to the library as part of the papers of Dr. George Bagley. It is not known how Dr. Bagley obtained the letter. However, at the time of the Birmingham Campaign in 1963, Dr. Bagley was the Executive Secretary-Treasurer of the Alabama Baptist State Convention so it is likely he received it while he was serving in this role.

Dr. King began writing the letter on the edges of a newspaper while in the Birmingham jail. The notes were smuggled out to Wyatt Tee Walker, Executive Director for the Southern Christian Leadership Conference, and his secretary, Willie Pearl Mackey. It was Mackey that took the scraps of notes and typed the first drafts of the letter. The typed copy concludes with the initials of MLK:WM noting the letter's author and the woman who typed it.

The library's copy of the letter will also be featured as part of an interview with Ms. Mackey in "Martin Luther King Jr.: One Man and His Dream," a new BBC documentary on Dr. King observing the 50th anniversary of his assassination. This documentary is scheduled to air in the U.S. on the Reelz network on April 1st at 9pm ET/ 6pm PT.

You will need Microsoft Excel® or compatible software like Open Office to read XLS, XLT, XLSX or XLTX files.

You will need Microsoft Word® or compatible software like Open Office to read DOC, DOT, DOCX or DOTX files.

You will need Adobe Acrobat Reader® or compatible software like SumatraPDF to read PDF files.